No, I’m not talking about 1970’s band whose second album, At the Sound of the Bell (1976), is among my favorite of their album titles.

Rather, I am sitting here laughing about yet another of Bonnie’s conditioned responses. I have no idea what brought 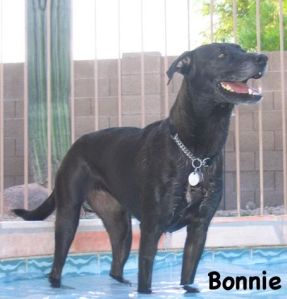 this one about, but she drinks from her water dish whenever we grind coffee. No matter what time of day or night, the sound of the coffee grinder sends her running to her water dish for a few quick laps.

Some of her other conditioned responses include:

These I can explain, I think. She associates the aluminum foil with deli meat because Mr. Desert often uses it to wrap our sandwiches, and our cat Boomer used to run out to the kitchen whenever he smelled deli ham (which was usually when Mr. D was making our lunch before going to bed). Bonnie loves to swim, and so does Mr. D. She always gets to swim when we do, but sometimes Mr D leaves her inside so he can clean the pool. Our pool is in the backyard, so she must associate his going into the backyard with the pool. She only does this, though, in the spring, summer and fall–smart dog.

I usually work until just before I go to bed, so when I close my laptop it means I will be going to bed soon, and she’ll get a treat when I do. The treats are on the island.

The cellphone thing started last fall (2010) when my left leg was in a cast, and I would call Mr. Desert as I drove in so he could come help me get the scooter I was using out of the car. That process resumed in Feb 2011 after surgery on the same foot. The funny thing is (and was) that she does it even when she’s sitting next to me and his cell rings.

I suppose the thing about conditioned responses is that once learned there is no going back.